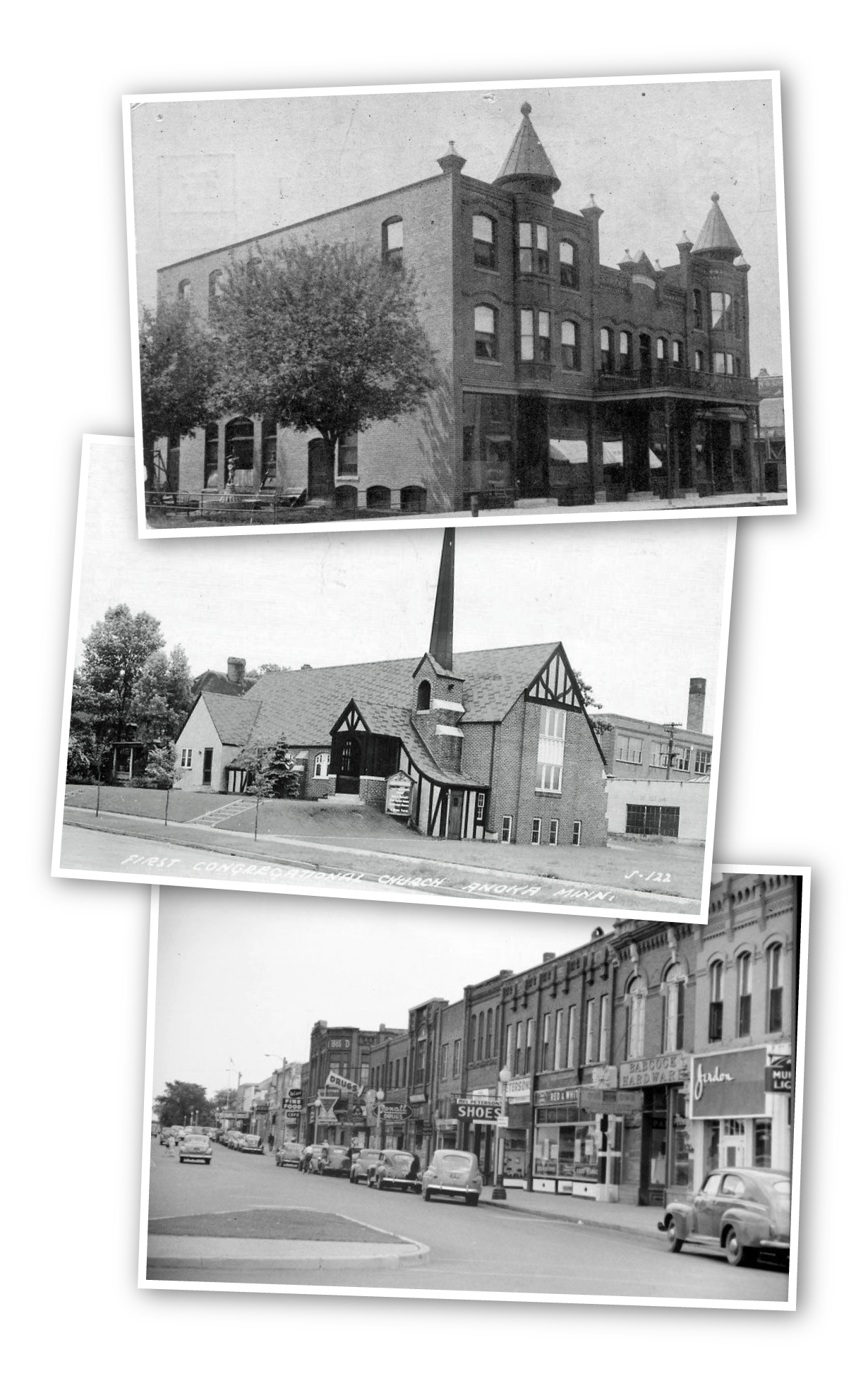 Some time in 1933, a group of young women were escorted to the Green Theater in downtown Anoka to compete for the Miss Anoka title. Ed O’Connell, a local and prominent businessman, is said to have been in charge of the event, which during the days of the Depression, amounted to just one evening under the spotlight for one lucky young woman. The spotlight that evening in Anoka belonged to 17-year-old Ruth Herbold, the daughter of a minister and a nurse’s aide. In 1987, Ruth Herbold Moore fondly recalled that she and the other candidates ‘congregated at Green Theater, walked across the stage and that was about it, really.’ She doesn’t recall going to any parades or festivals. The only reminder she had was a loving cup in which Ruth’s name was inscribed along with Miss Anoka 1933. It’s a small silver cup resting on a plastic stand.

Because of the Depression and the war years Miss Anoka pageant did not take place until 1947 when her 6-year old daughter was crowned Miss Anoka 1947.

-Taken from a 1987 Article in The Anoka County Union 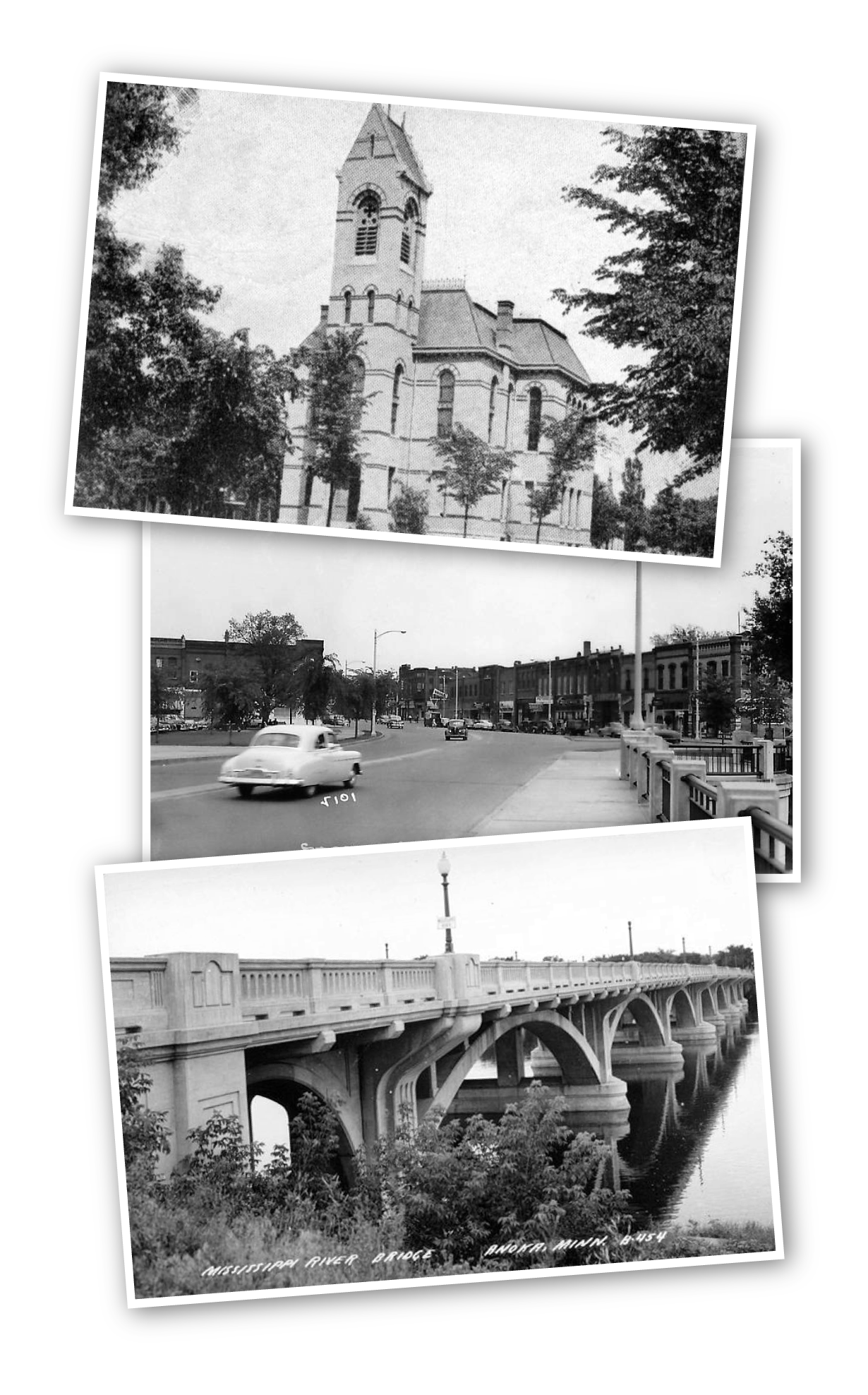 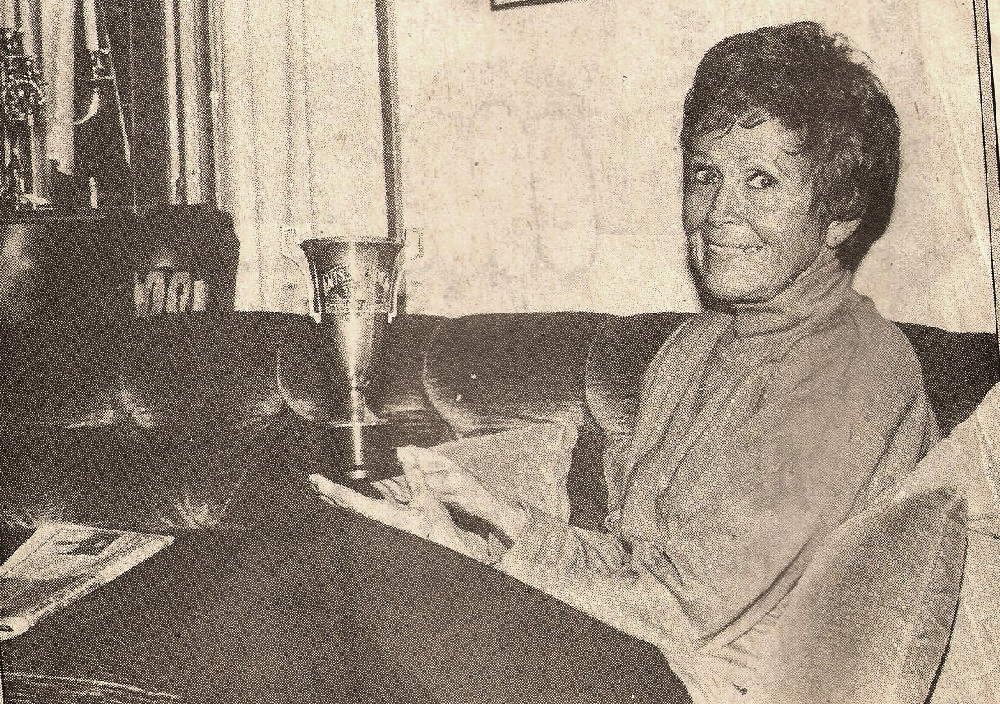 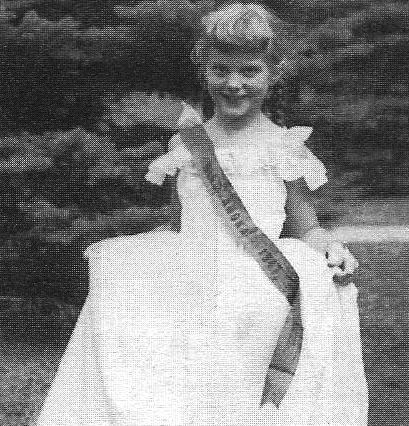 Miss Anoka: Julie Moore
Julie Moore, the daughter of Ruth (Herbold) and Fred Moore and was only 6 years old when selected.

No one made the connection that Ruth Herbold Moore had been Miss Anoka 1933 and she didn’t publicize it. The committee chose a king and a queen from each elementary school, and Miss Anoka was awarded a sash. Again, the Miss Anoka Pageant was put off until 1961 when Pam Albinson was selected in the summer.

In 1961, Mr. & Mrs. Rex Erickson decided to bring back the Miss Anoka Contest after over a decade since the last choosing of a king and queen, when the contestants were elementary school students.

Miss Anoka: Pamela Jo Albsinson
Pam Albinson’s mother regularly had her hair done at the Powder Puff Beauty Shop in town where the shop owners were very good and kind to her family. She insisted that Pamela enter the Miss Anoka contest for the owners of the shop.

The Queen Coronation was held at Greenhaven Country Club in the summer of 1961. Clem Gruber was the Queen Committee Chairman and Ken Peterson was Master of Ceremonies. To Pamela’s surprise, she was crowned Miss Anoka from the 19 candidates. No princesses were crowned in this year. She left only a few weeks later to run for Minneapolis Queen of the Lakes where she was crowned the 1962 Queen of the Lakes!

Miss Anoka: Marilyn Roden
Marilyn fondly recalls in an article recruiting queen candidates in the paper, ‘The day Pam Albinson retired as Miss Anoka and placed the crown on my head was one of the proudest days of my life.’

Marilyn was also a candidate for the Queen on the Lakes program during the 1962 Aquatennial, which ran from July 12- July 20.

Right: Newspaper press release from after Mary Ann was crowned. The 1963 coronation ceremony was held on Tuesday, July 30.

1964 marked the first year the program had pictures of the candidates.

After Nancy was crowned an Aquatennial Princess she was welcomed home and crowned a new Miss Anoka, Diane. A new Anoka Princess was named, too, Peggy Coleman. Their new titles didn’t last long…only one day. The very next day the 1967 Anoka Royalty was selected.

Nancy was the first Anokan to wear the Aquatennial crown that is still used today.

Miss Anoka: Diane Sanasac
Princesses: Kathy Mahany  |  Karen Brandell  |  Patti Danielson
Diane was crowned on July 25, 1967. This year also marked the first time a third princess was announced, Patricia Joy Danielson. Following policy, the judges always pick a third candidate to reign in the event any princess of the present royalty is unable to perform her duties. The committee this year decided to make it public. Princess Patti was an honored guest at Oktoberfest!

The decision was made this year that the Queen Coronation would be held in conjunction with Anoka Halloween Festivities, in October. Diane, Kathy, and Karen reigned over 1967 Anoka Halloween and 1968 Anoka Halloween. They crowned the 1969 royalty during the 1968 festival.

Queen Annette received a $200 wardrobe, $100 scholarship, four days at the St. Paul Winter Carnival, and nine days at the Minneapolis Aquatennial. Princess Cay and Princess Sally each received $25 and a cosmetic kit.

When Annette became the Aquatennial Queen of the Lakes, Cay became Anoka’s new queen at a homecoming reception in Annette’s honor. It was reported that about 200 guests attended the reception. It was also at this event two new princesses were named and crowned, Mary Gallagher and Cindy Mealhouse. Cay, Mary, and Cindy reigned over the 1969 festival.

Mr. & Mrs. Erickson announced their retirement from starting up and building the program in 1961. The threat of the program ending was at risk as no one was stepping forward to take charge.

A newspaper clipping from June 27, 1969, states that the Miss Anoka Contest has been dropped after the decision was made by the Anoka Halloween, Inc. board of directors. Anoka Halloween asked the Chamber of Commerce to take over the program, but they declined. The article states that Mrs. Erickson thought, ‘…we would have more potential help, but if the business community does not care, why should we?’

We’re not sure if a coronation pageant took place this year. 1969 is the only year we are missing a program booklet from. We think Queen Cay retired and Mary Gallegher and Cindy Mealhouse continued on as the 1970 royalty.

If you know what happened during this time, please e-mail AnokaRoyalty@gmail.com and share the story.

Miss Anoka: Mary Gallagher
Princesses: Cindy Mealhouse
Mary Gallagher and Cindy Mealhouse were crowned new princesses during a public reception in July to honor the newly crowned Aquatennial Queen of the Lakes 1970 and Miss Anoka 1969, Annette St. Dennis. We know Mary and Cindy reigned as princesses during the 1969 festival and we think they continued to represent Anoka in 1970. Records indicate Mary reigned as queen over the 1970 festival. There is a special note in the program booklet from Harold Foell, Anoka Halloween Chairman, giving special thanks to the Welcome Wagon Club of Anoka under the direction of Pat Hjort and her committee for making the program possible that year.

If you know the history of what happened during the years 1968-1970, please e-mail AnokaRoyalty@gmail.com, and tell us the story.

The Dating Game (a popular dating show at the time) had a grand prize featuring a trip to the 1970 Anoka Halloween festival. The winning couple, Graciela Koppers & Steve Heimple, were welcomed to Anoka by hundreds of students and well-wishers when their helicopter landed at Goodrich Field. They were special guests at the coronation and were a part of both Halloween parades.

Miss Dominion of Canada 1977, Jackie Dreher, was a special guest at the coronation.

Miss Anoka: Holly (Lysdahl) Cotner
Princesses: Karen George  |  Karen Kind
The 1980 Royalty was very excited to debut their Halloween-themed float after riding on a pink and purple float for most of the summer. Karen George served as President of Anoka Halloween, Inc. in 2008 & 2009, and as a Minneapolis Aquatennial Captain in 2014.

Miss Anoka: Jolene (Leadens) Radermacher
Princesses: Pamela Mason  |  Shelly (Heinen) Ferris
Pamela was killed in a car accident during her reign. The decision was made not to replace her that year.

After Polly was crowned an Aquatennial Princess, Rhonda Sears was named Miss Anoka, and a new Anoka Princess was announced. 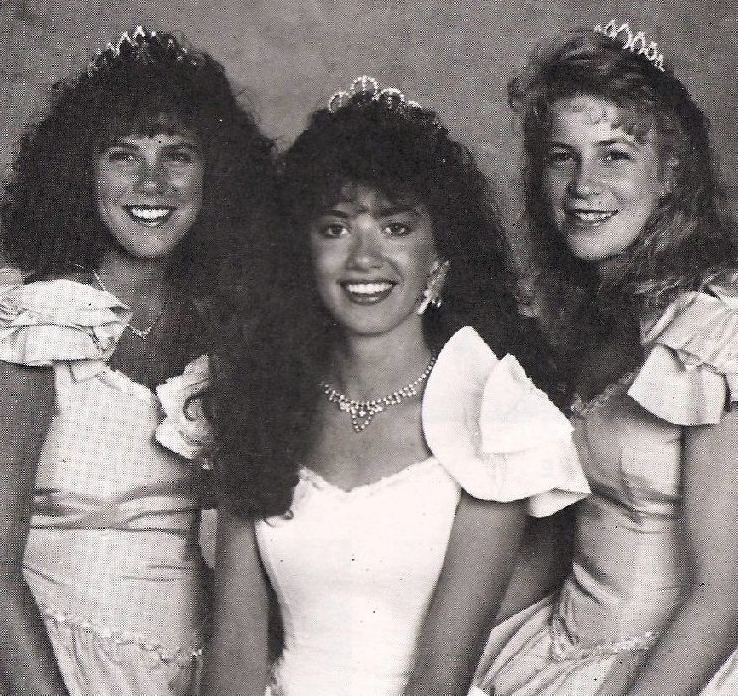 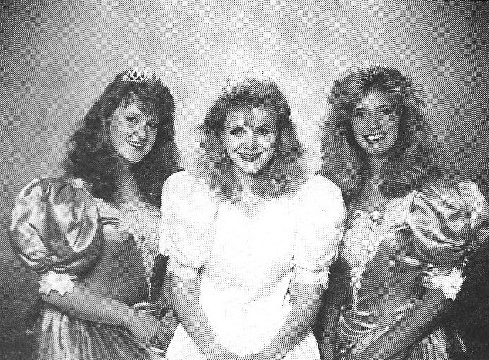 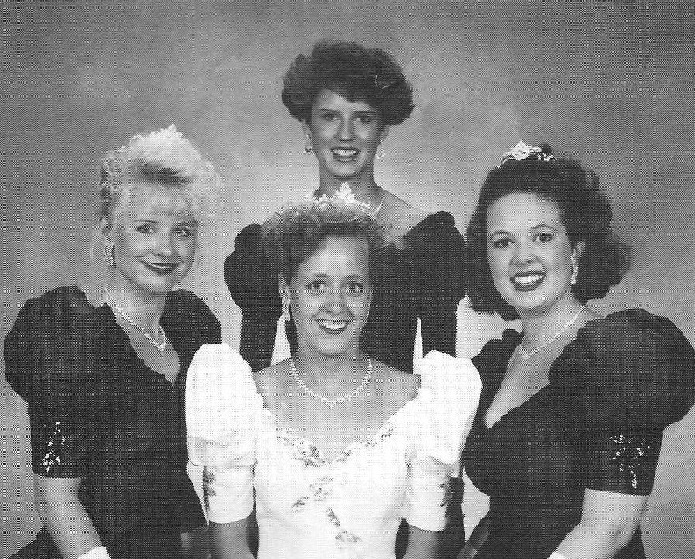 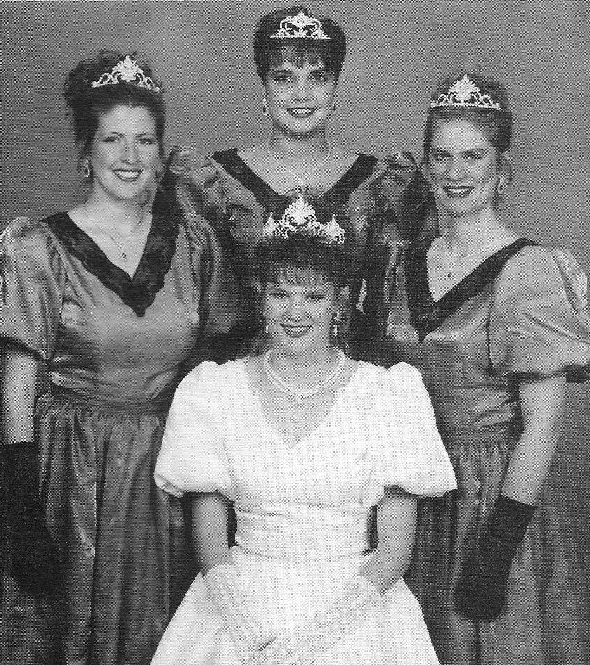 Marianne Muehlbauer and Linda Stuart-Julig chaperoned Gretchen to Japan in 1995. 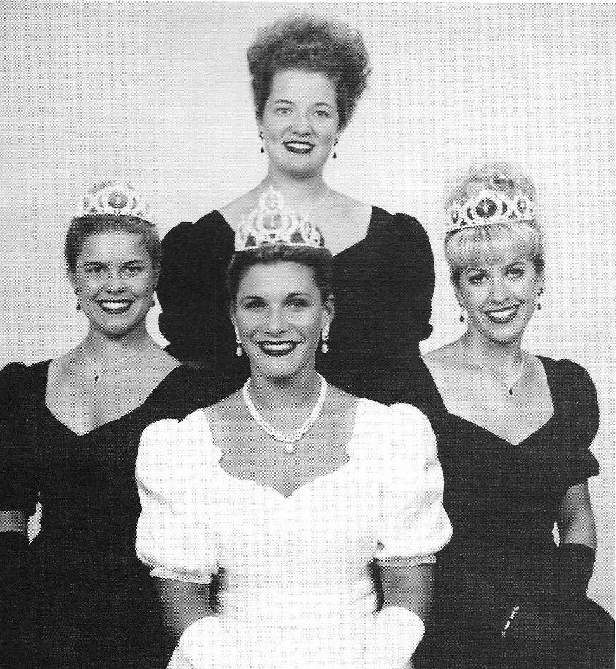 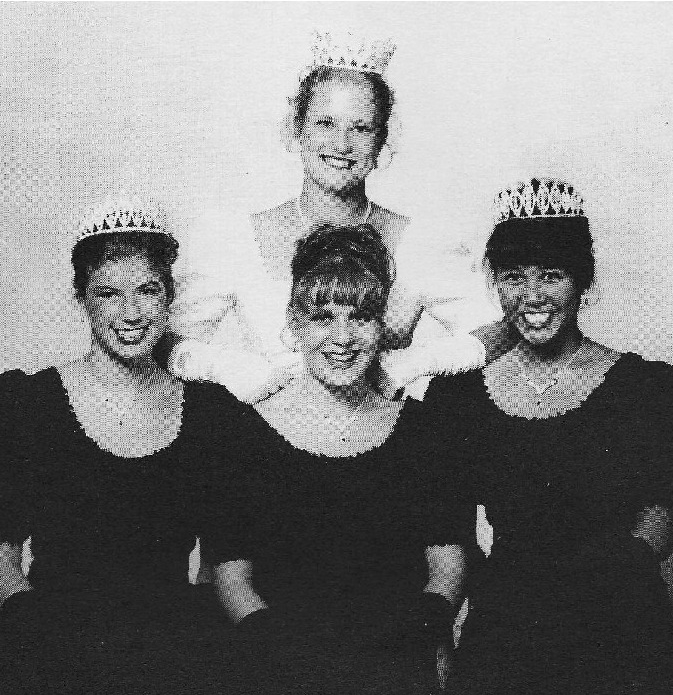 This was Anoka’s last trip to Japan 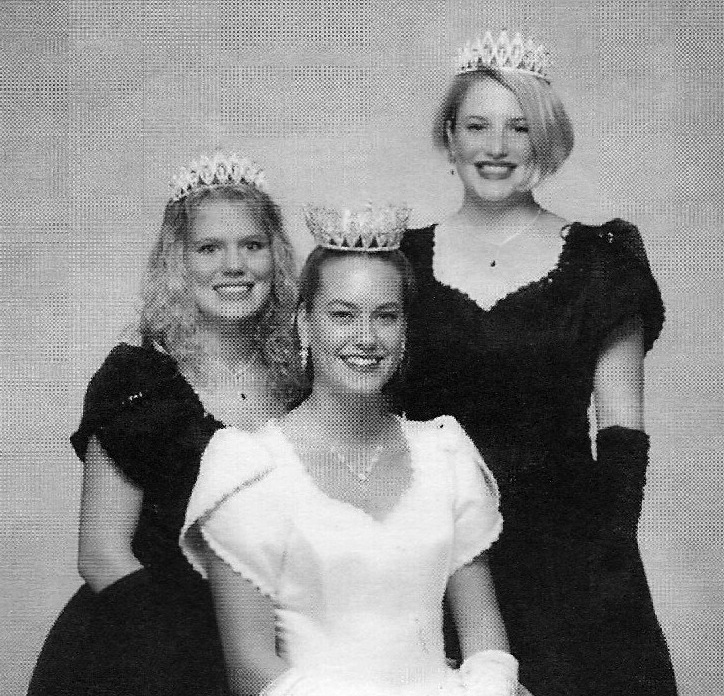 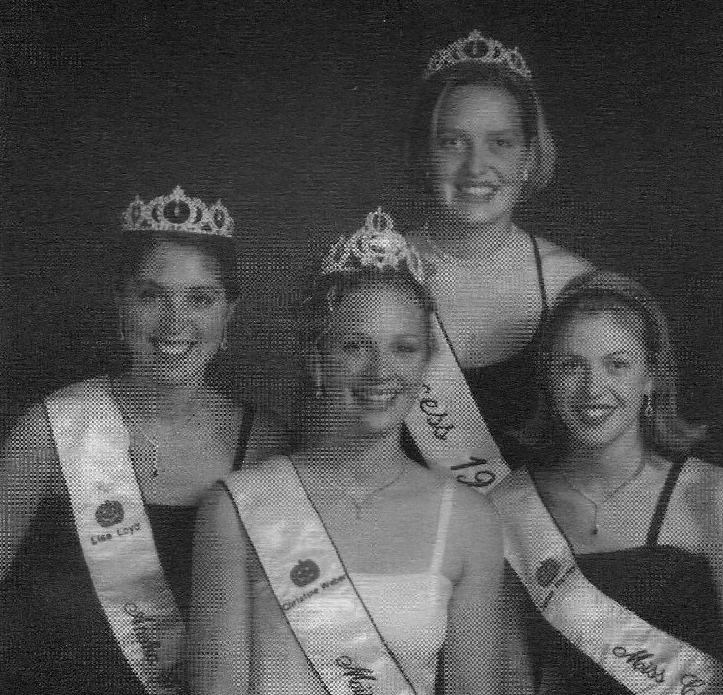 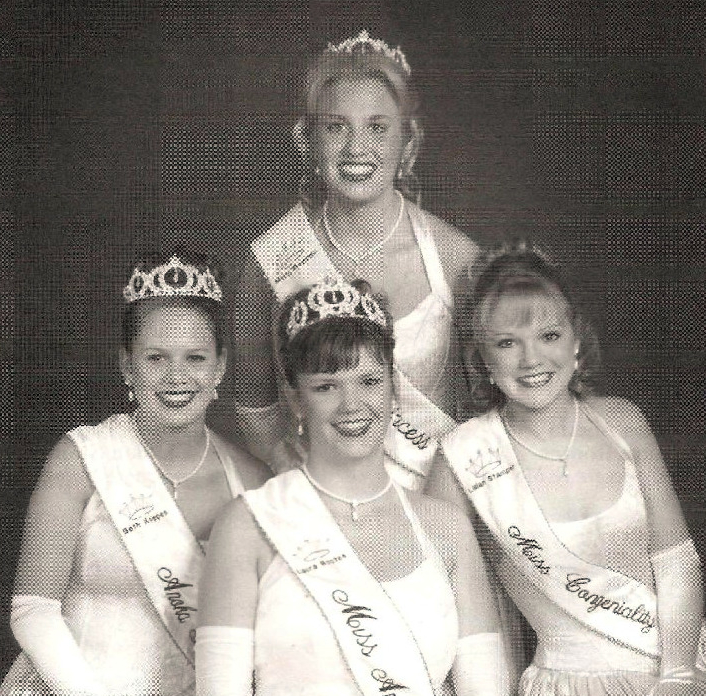 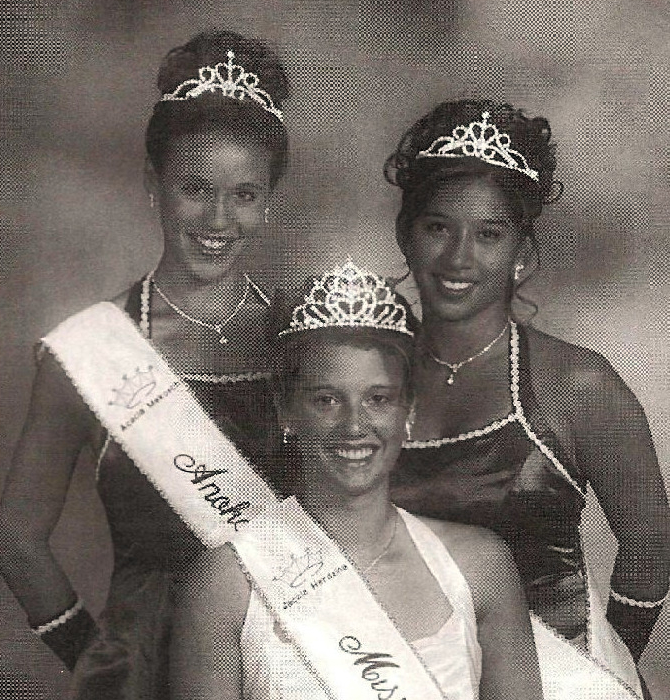 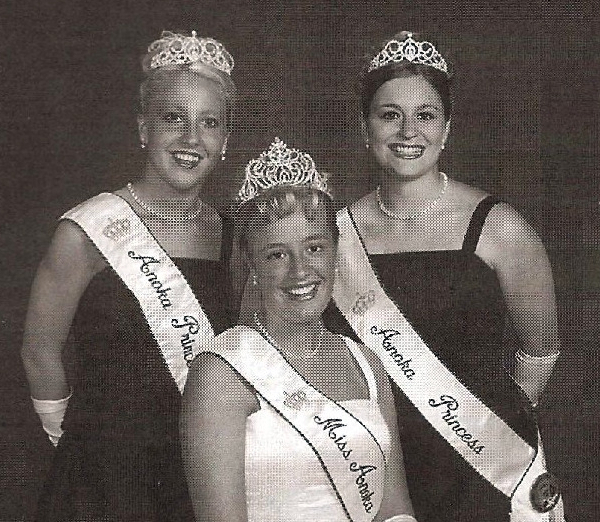 Miss Anoka: Amy (Krochalk) Ceglio
Ambassadors: Christine Johnson  |  Laura (Tkachenko) Nereson
Laura and her sister, Carrie (1986), were both crowned an Anoka Princess and selected as Miss Congeniality by their peers.

Heidi Wells steps away from running the program after five years. Sonja Weiler and Sharolyn Carlson take on the leadership role; they were young enough to be candidates with Amy, Christine and Laura. 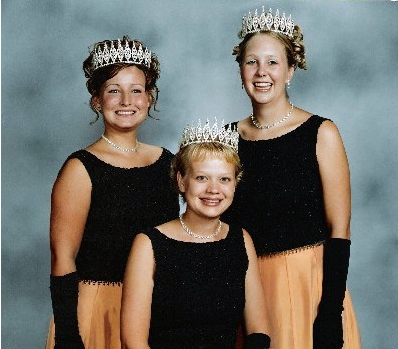 Crystal represented Anoka at the Minneapolis Aquatennial in July of 2003. 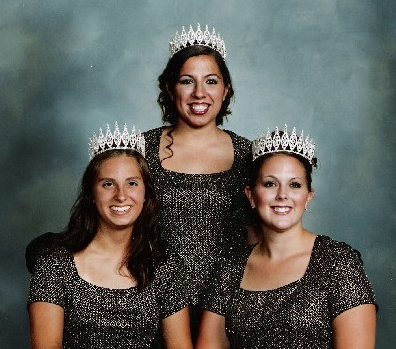 Ambassadors: Athena Galvan  |  Katie (Greene) Greene-Schultz  |  Andrea Jennings
We knew it was time to think about a new float when it was riddled with issues during the year. A tire fell off the float in Silver Lake, there were at least 2 flat tires en route to parades, and the generator didn’t work at the Minneapolis Torchlight parade and Anoka’s Light-up-the-Night parade. This meant no lights and no music. At Anoka’s parade Athena, Katie, and Andrea rode with the candidates on their lit float.

Katie represented Anoka at the Minneapolis Aquatennial in July of 2004. 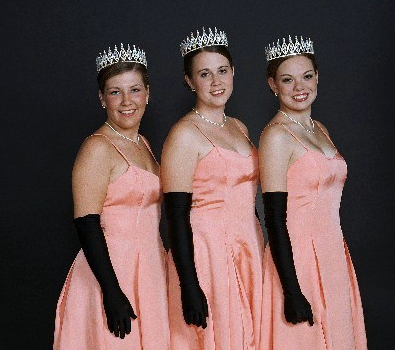 Ambassadors: Erinn (Britton) Weinmann  |  Kate (Sorenson) Bergseng  |  Megan Canny
The new float, built by Jim Rootes, Pat Minor, and Gary Munkholm, made its debut at the St. Francis Pioneer Days Parade. For the first few parades the ambassadors rode in a convertible loaned to us by Coon Rapids Chrysler. This was not only fun for them but also for Sharolyn and Sonja who drove the ambassadors through the parades.

Because of the low interest level of college-aged women, Anoka Halloween opened up the requirements to include female Anoka High School Seniors. The program ended up attracting 25 candidates for the 2004 festival.
Kate represented Anoka at the Minneapolis Aquatennial 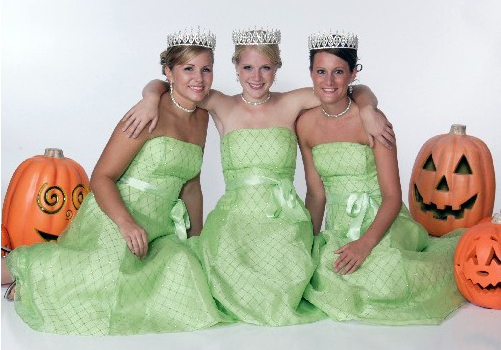 Nichelle Hackert served as an Aquatennial Princess from January 2007-July 2007 after the Queen of the Lakes stepped down to serve her country in the National Guard. This was the first time in the history of Aquatennial that the alternate envelope was opened because an ambassador stepped down. 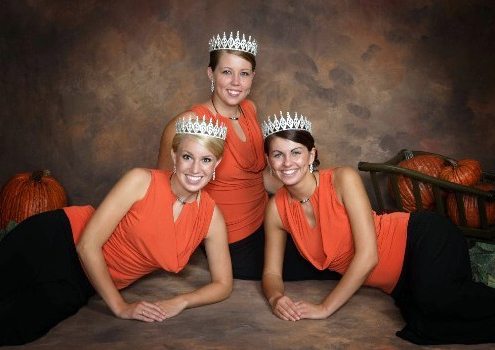 Nichelle Hackert had the exciting task of crowning her friend at the Queen of the Lakes Coronation. An exciting moment for all in Anoka! 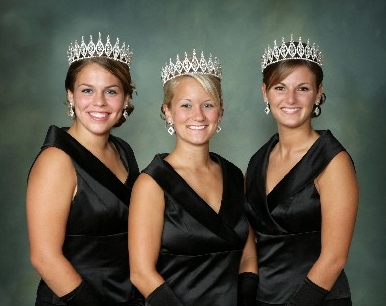 Ambassadors: Cassie Nigh  |  Jenny Regenscheid  |  Erin (Messer) Echternach
The festival of 2007 attracted 45 candidates, twice as many as the program attracted the year before!

In 2012, Jenny, stepped into a leadership role of running the Anoka Royal Ambassador Program.

Erin represented Anoka at the Minneapolis Aquatennial in July of 2008. 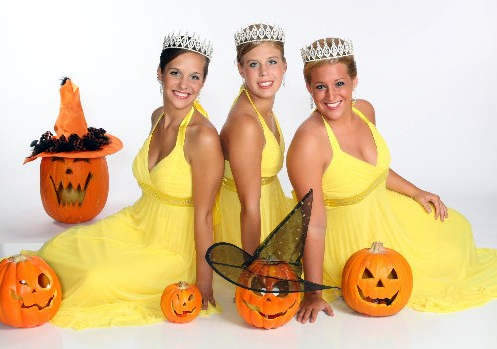 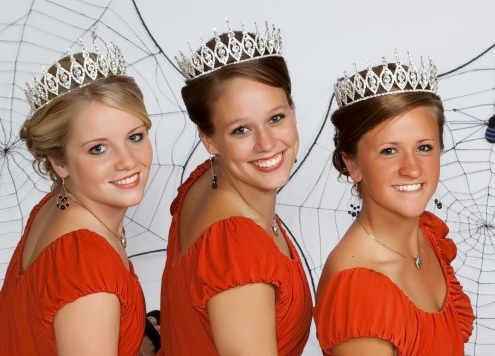 Molly represented Anoka at the Minneapolis Aquatennial in July of 2010. 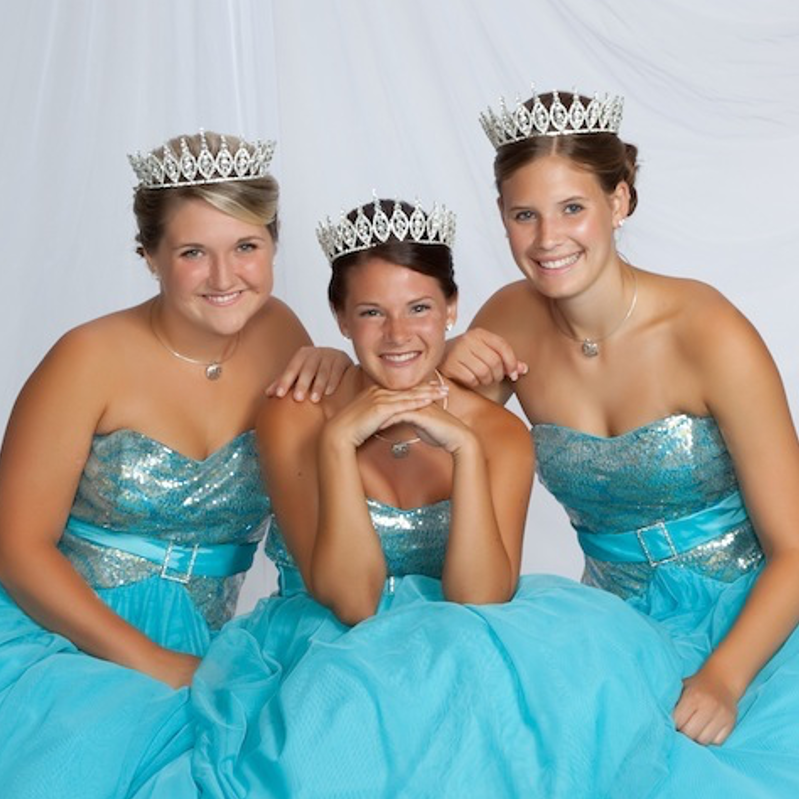 Erin represented Anoka at the Minneapolis Aquatennial in July of 2011. 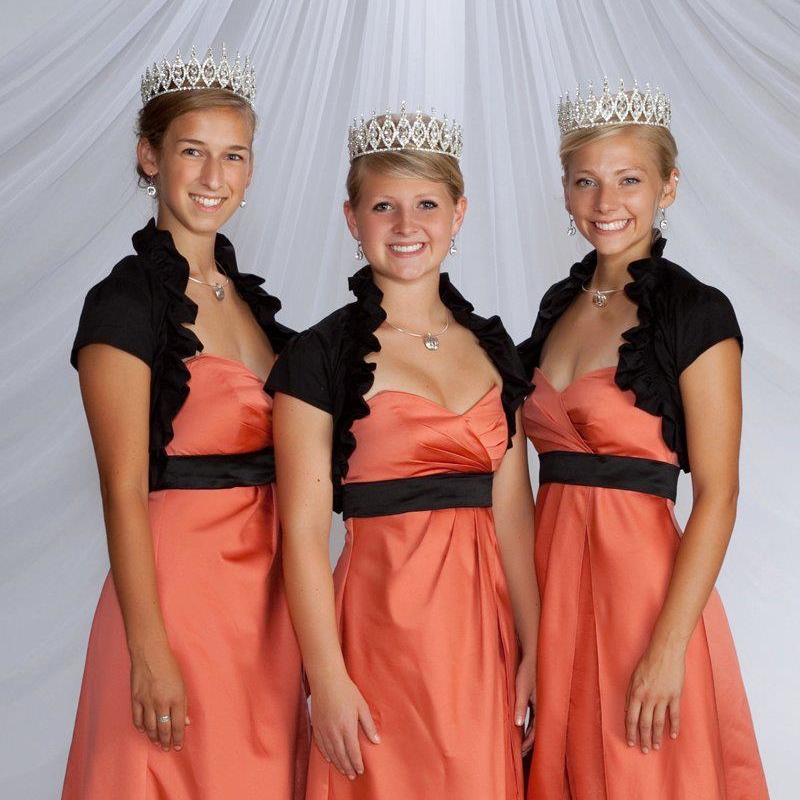 Ambassadors: Katelyn Regenscheid  |  Brenna Morgan  |  Taylor Nelson
This year marked the last for the acting leadership of Sharolyn Carlson and Sonja Weiler.
Brenna represented Anoka at the Minneapolis Aquatennial in July of 2012. 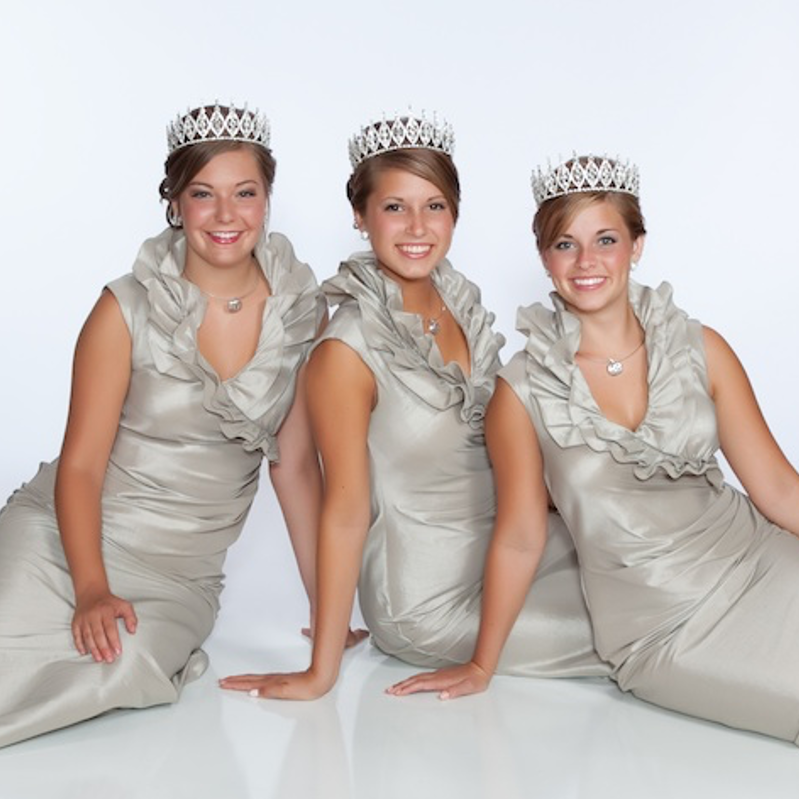 Hailee represented Anoka at the Minneapolis Aquatennial in July of 2014.

This marks the first year that the Miss Congeniality Award was changed to the Alexandra Award, in honor of Alexandra Skaalerud (2009).  Erica Tembreull was the first recipient.

This marked the first year of acting leadership for Angie Springer.

Morgan represented Anoka at the Minneapolis Aquatennial in July of 2022.

Claire will represent Anoka at the Minneapolis Aquatennial in July of 2023.

This marked the last year of acting leadership for Angie Springer.